See discussions, stats, and author profiles for this publication at: https://www.researchgate.net/publication/345758544

Objectives: Radiological examination has an important place in dental practice, and it is frequently used in intraoral imaging. The correct numbering of teeth on radiographs is a routine practice that takes time for the dentist. This study aimed to propose an automatic detection system for the numbering of teeth in bitewing images using a faster Region-based Convolutional Neural Networks (R-CNN) method.

Methods: The study included 1125 bite-wing radiographs of patients who attended the Faculty of Dentistry of Eskisehir Osmangazi University from 2018 to 2019. A faster R-CNN an advanced object identification method was used to identify the teeth. The confusion matrix was used as a metric and to evaluate the success of the model.

Results: The deep CNN system (CranioCatch, Eskisehir, Turkey) was used to detect and number teeth in bitewing radiographs. Of 715 teeth in 109 bite-wing images, 697 were correctly numbered in the test data set. The F1 score, precision and sensitivity were 0.9515, 0.9293 and 0.9748, respectively.

Conclusions: A CNN approach for the analysis of bitewing images shows promise for detecting and numbering teeth. This method can save dentists time by automatically preparing dental charts.

The radiological examination has an important place in dentistry practice and is frequently used in intraoral imaging. For this purpose, periapical and bitewing films are routinely used in the clinics [1,2]. Imaging and interpretation of dental condition on radiographs are the most important steps in disease diagnosis [2]. In hospital information systems, in which almost all records are digital, physicians must main accurate dental records [3]. Depending on the experience and attentiveness of the physicians, misdiagnosis or inadequate diagnosis can occur in busy clinics. To prevent this, teeth must be correctly identified and numbered. The detection and numbering of teeth on radiographs are also important for forensic investigations [4]. Computer-aided systems have been developed to assist physicians in medical and dental imaging [3,5]. Teeth were identified from dental films by various engineering methods [6], which rely on predefined engineered feature algorithms with explicit parameters based on expert knowledge [7]. Deep learning systems can automatically learn components in data without the need for prior interpretation by human experts. Convolutional neural networks (CNNs) are the most common deep learning architectures used in medical imaging [8]. CNNs can automatically extract image features using the original pixel information and are frequently used for dental imaging [9]. In dentistry, CNNs are used clinically for caries detection [10,11], apical lesion detection [12,13], diagnosis of jaw lesion [14,15], detection of periodontal disease [16,17], classification of maxillary sinusitis [18], staging of lower third molar development [19], detection of root fracture [20], evaluation of root morphology [21], localization of cephalometric landmarks [22] and detection of atherosclerotic carotid plaques [23] Therefore, CNN-based deep learning algorithms show clinical potential. CNNs have been used to number teeth on panoramic and periapical films [9,24]. We propose an automatic detection system for numbering teeth in bitewing images using faster Region-based Convolutional Neural Networks (R-CNN) method.

Bite-wing radiographs, used for various diagnostic purposes, were obtained from the archive of the Faculty of Dentistry of Eskisehir Osmangazi University. The data set included 1125 anonymized bite-wing radiographs from adults obtained from January 2019 to January 2020. Only high-quality bite-wing radiographs were included in the study. Radiographs with metal imposition, cone-cut, position and motion artefacts, crown, bridges or implants were excluded. The research protocol was approved by the Non-interventional Clinical Research Ethics Committee of Eskisehir Osmangazi University (decision date and number: 27 February 2020/25) and was following the principles of the Declaration of Helsinki.

A pre-trained Google Net Inception v2 faster R-CNN network was used for preprocessing the training data sets by transfer learning. Tensorflow was used for model development (Figure 1). The architecture was initially evaluated in 2015. It featured batch normalization at the time of its introduction. Inception v2 is represented by a cyclical graphic from the input layer, and feed-forward network classifiers or regressors prevent bottlenecks in the previous structure (Inception v1). This information defines a clear direction to the flow. As it travels from entry to exit, the tensor size slowly decreases. It is also important that the width and depth are balanced within the network. For optimal performance, the width of the modules that provide depth must be adjusted correctly.

Increasing the width and depth increases the quality of the network structure, and the parallel processing load increases rapidly [25]. A faster R-CNN model was developed from Fast R-CNN architecture based on the R-CNN method was used for tooth detection. This model allows the extraction of feature maps from the input image using ConvNet and passes those maps through an RPN which returns object proposals. Next, the maps are classified, and the bounding boxes are predicted.

Proposed artificial intelligence (AI) model (CranioCatch, Eskisehir, Turkey) approach for tooth detection and numbering is based on a deep CNN using 200,000 epochs trained with faster R-CNN inception v2 (COCO) with a 0.0002 learning rate. The type of tooth must be specified using a separate deep CNN. The training was performed using 7000 steps on a PC with 16 GB RAM and the NVIDIA GeForce GTX 1660 TI. The training and validation data sets were used to predict and generate optimal CNN algorithm weight factors. Bite-wing images were  andomly distributed into the following groups:

The data from the testing group were not reused.

After the first training, the model was used to identify the presence of teeth in the following manner.

The confusion matrix was used as a metric to evaluate the success of the model. This matrix is a meaningful table that summarizes the predicted and actual situations. The performance of systems is frequently assessed using the data in the matrix [26].

The metrics used to evaluate the success of the model were as follows:

After calculating TP, FP and FN, the following metrics

The deep CNN system showed promise for numbering teeth in bite-wing radiographs (Figures 4 and 5). The sensitivity and precision were high for numbering and detecting teeth. The sensitivity, precision and F-measure values were 0.9748, 0.9293 and 0.9515, respectively (Tables 1 and 2). Of the 108 radiographs that constituted the test group, 96 (88.9%) did not have a tooth deficiency, and 12 (11.1%) had a tooth deficiency. The number of missing teeth in these radiographs was 15. 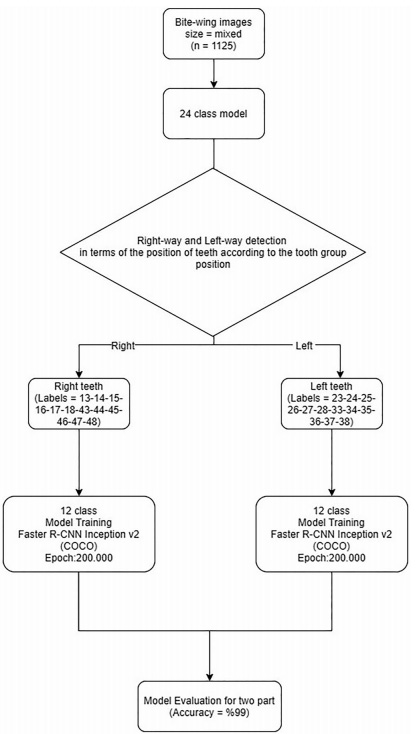 image-enhancement algorithms. The deep learning method yields fair outcomes by automatically obtaining image features. The objects detected in an image are classified into a pre-trained network without preliminary diagnostics, as a result of processes such as various filtering and subdivision. With its direct problem-solving ability, deep learning is used extensively in the medical field, and various deep learning architectures have been developed, such as CNNs, which have high performance in image recognition tasks [31]. Deep learning methods using CNNs are a cornerstone of medical image analysis [8,32]. Such methods have also been preferred in AI studies in medical and dental radiology [5,7] and will facilitate tooth detection and numbering in dental radiographs. The aim of radiological AI studies is automated, routine, simple evaluations so that radiologists can read images faster, saving time for more omplex cases. The numbering of teeth in dental radiology is a routine evaluation that takes up time. Mahoor et al. [6] introduced a method for robust classification of premolar and molar teeth in bitewing images using Bayesian classification. They used two types of Fourier descriptors: complex coordinates signatures and centroid distances of the contours for feature description and classification. The results showed a considerable increase in performance for maxillary premolars (from 72.0% to 94.2%). They concluded that the classification of premolars is more accurate than that of molars. Lin et al. [28] used imageenhancement and tooth-segmentation techniques to classify and number teeth on bite-wing radiographs. Their system showed accuracy rates of 95.1% and 98.0% for classification and numbering, respectively [28]. Ronneberger et al. [33] designed a U-Net architecture for bite-wing imaging of tooth structure (enamel, dentine and pulp) segmentation. The similarity value was over 70% [33,34]. Eun and Kim [35] used a CNN model to classify each tooth proposal into a tooth or a non-tooth in periapical radiographs. In their method, the tooth was marked using oriented bounding boxes. The oriented tooth proposals method showed much higher performance than did the sliding window technique [35]. Zhang et al. [36] applied CNN for tooth detection and classification in dental periapical radiographs. Their method achieved very high precision and recall rates for 32 teeth positions [36]. Tuzoff et al. [24] used the VGG-16 Net, a base CNN method using a regional proposal network for object detection, to detect and number teeth on panoramic radiographs for automatic dental charting; the accuracy was >99% [24]. Oktay [37] used a CNN with a modified version of the Alex net architecture to perform multi-class classification; the accuracy was >90% [37]. Miki et al. [4] evaluated a method to classify tooth type on cone-beam CT images using a deep CNN. The accuracy was up to 91.0% [4]. Silva et al. [38] presented a preliminary application of the MASK recurrent CNN to demonstrate the utility of a deep learning method in panoramic image segmentation. The accuracy, specificity, precision, recall and F-score values were 92%, 96%, 84%, 76% and 79%, respectively. Therefore, mask R-CNN yielded few false positives and false negatives using a small number of training images. Wirtz et al. [39] assessed automatic tooth segmentation in panoramic images using a coupled shape model with a neural network. This model ensures the segmentation of the tooth region concerning position and scale; the average precision and recall values were found to be 0.790 and 0.827, respectively [40]. Lee et al. [40] performed a fully deep CNN model purposed propose a more refined, fully deep learning method using a fine-tuned, fully deep, a mask R-CNN for automated tooth segmentation of dental panoramic images. The precision, recall F1 score and mean IoU value were 0.858, 0.893, 0.875 and 0.879, respectively. That method showed better performance than those of Silva et al. [38] and Wirtz et al. [39]. The performance for incisors and canine teeth was better than for other tooth types. Previous studies using deep learning methods were based on panoramic and periapical radiographs. To our knowledge, no study has evaluated tooth detection or numbering in bite-wing radiographs using a deep learning method based on R-CNN. Our samples included 1125 bite-wing radiographs. The proposed model had high sensitivity and precision rates. The sensitivity, precision and F-measure values were 0.9748, 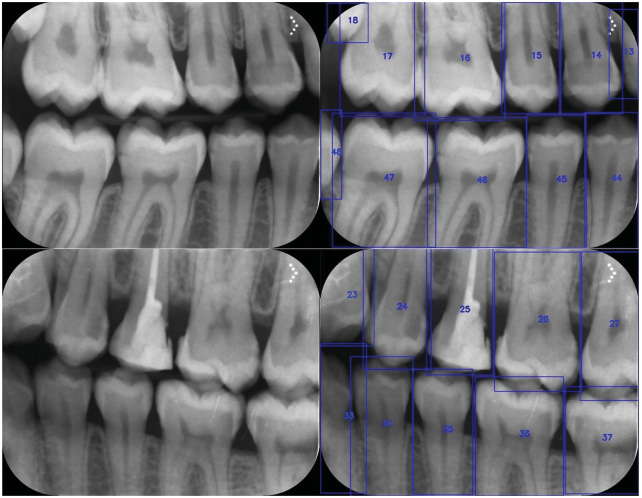 Table 1. The number of teeth detected and numbered correctly and incorrectly by the artificial intelligence (AI) models

0.9293 and 0.9515, respectively. The samples lacked crowns, bridges, implants and implant-supported restorations; also, 12 (11.1%) radiographs had tooth deficiency. Radiographs with primary teeth were excluded, and only radiographs obtained from adults were used. These limitations should be the focus of further studies.

A CNN approach for the analysis of bite-wing images holds promise for detecting and numbering teeth. This method can save time by enabling automatic preparation of dental charts and electronic dental records.

All procedures performed in studies involving human participants were following the ethical standards of the institutional and/or national research committee and with the 1964 Helsinki declaration and its later amendments or comparable ethical standards.

Additional informed consent was obtained from all individual participants included in the study.

The authors declare that they have no conflict of interest.

[29] Yuniarti A, Nugroho AS, Amaliah B, et al. Classification, and numbering of dental radiographs for an automated human identification system. TELKOMNIKA. 2012;10(1):137.

The articles on this site cannot be quoted or copied without permission and without reference.

Expressions belong to readers / commenters. Sanal Yazılım Ltd. or drdentes.com.tr is not responsible for these reviews.

Your privacy is important to us. This privacy statement explains the personal data our processes, how our processes it, and for what purposes.

Personal Data We Collect
If you accept this policy, we will save your; Contact details including name, surname, email and telephone number.

How We Use Your Personal Data?

We use cookies to enhance user experience, analyze site usage and assist in our marketing efforts. By continuing to browse our site or closing this banner, you acknowledge that you have read and agree to our Cookie Policy.